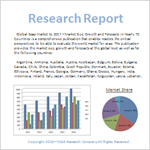 Interferons are small, low molecular weight proteins of varying sizes induced during attack by infectious agents like viruses. Investigators have found that they are highly variable in nature and have several subtypes due to which misunderstanding is easily created. Furthermore, they have synergistic effect in which interferons belonging to different classes have same effect on immune system due to sharing of common pathways. These facts gave emphasis on the development of classification system to organize, recognize, associate relationship and differentiate interferons from each other. Moreover, advent of genome sciences is allowing the investigators to look deeper into the DNA sequences that could be used to more clarity to existing classification system. In this way, investigators would be better informed and make suitable changes according to necessities of drug development program.

Interferon segment covers few diseases due to which they have modest market shares in pharmaceutical industry. Infectious diseases, few malignancies and Multiple Sclerosis are their major target group from which they generate revenues. Multiple sclerosis field is one of the highly developed segments which has numerous products and offer better performance than other therapeutics. In infectious diseases, they have significant effect and offers competition to vaccines which are one of the strongest pharmaceutical segments. In this segment, only for limited diseases they have very high pharmacological and commercialization potential due to which they are maintaining dominance in global market. Hepatitis and AIDS-associated disease is one such segment which generates significant revenues. On the other hand, cancer segment shows similar trend but their role in combinatorial therapy can’t be neglected due to which they have become important for treating cancer. Some of them are first-line cancer therapeutics and it is imperative to increase their number to offer sustained competition. In this way, interferons have become indispensible part of several disease segments but limited number of products seems to be the major limiting factor despite their superior pharmacological benefits.

During disease incidence, particular types of interferons or associated molecules are produced in body to provide protection against infectious agents. Interferon based diagnostics are relatively new concept for the market and they are expected to be used for several diseases. Mostly they would be used for identifying infectious disease because of their immunological origin. As a result, they would have higher resolution, precision, accuracy and reproducibility of results. This technology is at nascent stages and it has to face severe competition from already existing diagnostics tests. Besides infectious disease, it could also be used for early cancer diagnosis due to which several lives could be saved. Diagnostically, they will have superior performance but their higher costs may cause some hinderance in their successful commercialization. With time, it is expected that the costs of developmental technology would decrease due to which more patients would be opting them to identify potential diseases.

In past few years, significant investments have been made in research and development segment to come forth with innovative products. It was observed that administration of interferons triggers a cascade of reactions in which some genes are activated. So, emphasis was given on developing higher order organization containing different hierarchy that could be used to extract information related to interferon genes. Knowledge of such genes could be utilized to develop innovative interferon based therapeutics for different diseases. Moreover, it could prevent the undue consumption of time and resources involved in screening of potential interferon candidates for drug development program. Due to their applicability in different diseases it is expected that they would be able to occupy major market shares across the globe. As a result, several therapeutic products are at different stages of clinical trials which will be introduced in global market in coming years.